The popularity of Crazy-Fools.co.uk came about by opportunity of being one of the first few servers to be listed on the servers.minecraftforum.net server list. In the screenshot below from August 14th 2010 (sourced from the Wayback Machine) you can see that we were even in the number one spot.

(When survival multiplayer launched, servers.minecraftforum.net was one of the first and most popular methods to find public any Minecraft servers online.) 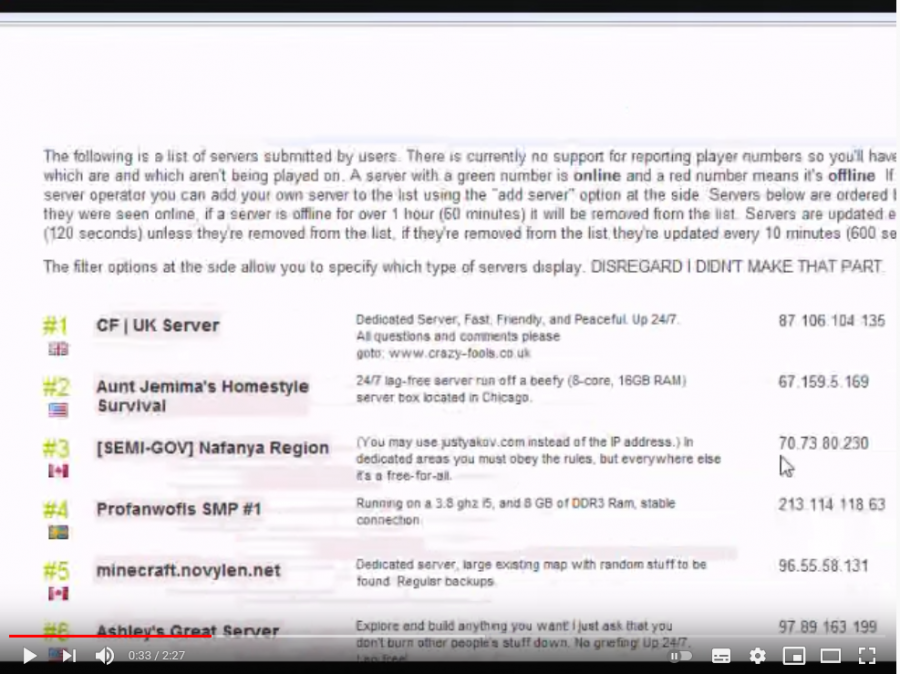 Being one of the first few servers on the list certainly brought visitors to the server, with at least 5 joining attempts every second from different players the slots quickly filled up to the maximum. There were no capabilities at this time to reserve a spot for anyone so it was just luck of the draw to get in!

With visitors brought chaos (and lots and lots of fun!), with no server side stored inventories (not introduced until Beta 1.0 in December 2010) or plugins for cheat protection meant lava falls placed everywhere (not even with buckets!), flying players, fires burning down forests. Even furnaces didn't work! Oh and griefing, lots of griefing. It was pure anarchy.

The server struggled too and frequent restarts were required. A Windows 2003 box with 8GB RAM tried its best to handle the unstable code, eventually something needed to happen to try improve the situation!

Eventually arrived Llamacraft, one of the first server modifications that required replacement of .class files inside the server .jar to help control the chaos of Minecraft Multiplayer.

Llamacraft helped prevent griefing with Flint and Steel, TNT, and Lava. Flint and Steel was converted into a 'lighter' which was a tool to change furnaces from an 'unlit' state to a 'lit' state by replacing the block ID. This allowed the furnace to burn materials and ore to craft better tools.

Llamacraft worked as a great sticking plaster for freshly established Minecraft servers. Once a multiplayer server modding scene had established along came hey0 with hmod, introducing the concept of Plugins.

Inbetween the time of Llamacraft and HMod, trouble brewed for Crazy-Fools.co.uk. Unforeseen circumstances meant the Windows 2003 server had to be unexpectedly shut down, causing the game server to disappear. A message appeared on the website after a few days:

"Hello there,
I would not be wrong in saying, long time no see?
First of all, I must of apologise for the extreme downtime of the both the site and the server.
The sad fact is, only (sic: one) managed to make it through, and I do not have to tell you which one.

I am sad to say, the CF | UK server is down for an unknown length of time - think of it as a holiday, but a sad one. - due to a problem with the server it was running on. If it were a hardware issue, it would be resolved, and we would not be in any of this mess whatsoever. But the fact I have needed to hunt down a new server for things to be hosted on (email, this website, blablabla) does not look promising for the Minecraft scene.
Right now the server itself is no longer in my possession and has been re-assigned, however with a slight hope, it may still return to my hands yet, in which, the Minecraft server will also return.

For the meantime however, this site will exist in its place, I have managed to back up all Minecraft data (expect for MySQL data, oops.) before the server was re-imaged, so the map, and inventories (and the bans, lol) are safe, which I may upload for download on a file-sharing site (megaupload, 4share, which is the best?) so you can re-live some old memories.

If you have any questions, or comments, feel free to e-mail me at broonie|-|crazy-fools.co.uk. Replace the |-| with the @ symbol, just some fool-proof spam protection."

On the 18th October, Crazy-Fools.co.uk found a new server to launch on and word quickly spread around that the server was back. The new IP address of the server did mean that the server was no longer on the top of the minecraftforum.net server list, however it was the old community through word of mouth that had returned back to the server.

Link account in it's initial form required players to register an account on the Crazy Fools website and generate a unique code with their username. The same code had to be entered in-game in order to complete the link. Once the players code had been correctly entered in game, they could build.

Crazy Fools has been running since, gathering thousands of visitors who have made the server their home, forming a wonderful community of regulars, old timers, and new visitors. With server wrapper changes to Bukkit, then Spigot, and now Paper, and a lean list of plugins.

Crazy Fools wouldn't be what it is today without support from it's community, both through the friendly atmosphere, superb volunteers, and financial support through donations towards server costs.

Crazy Fools UK, unlike many other servers, does not operate for profit. Funds raised were put towards server costs to ensure that the community can continue to thrive and always have a place to call home.

Comments on this page are locked.
Poll

Poll: Would you like to have your own Skyblock island?